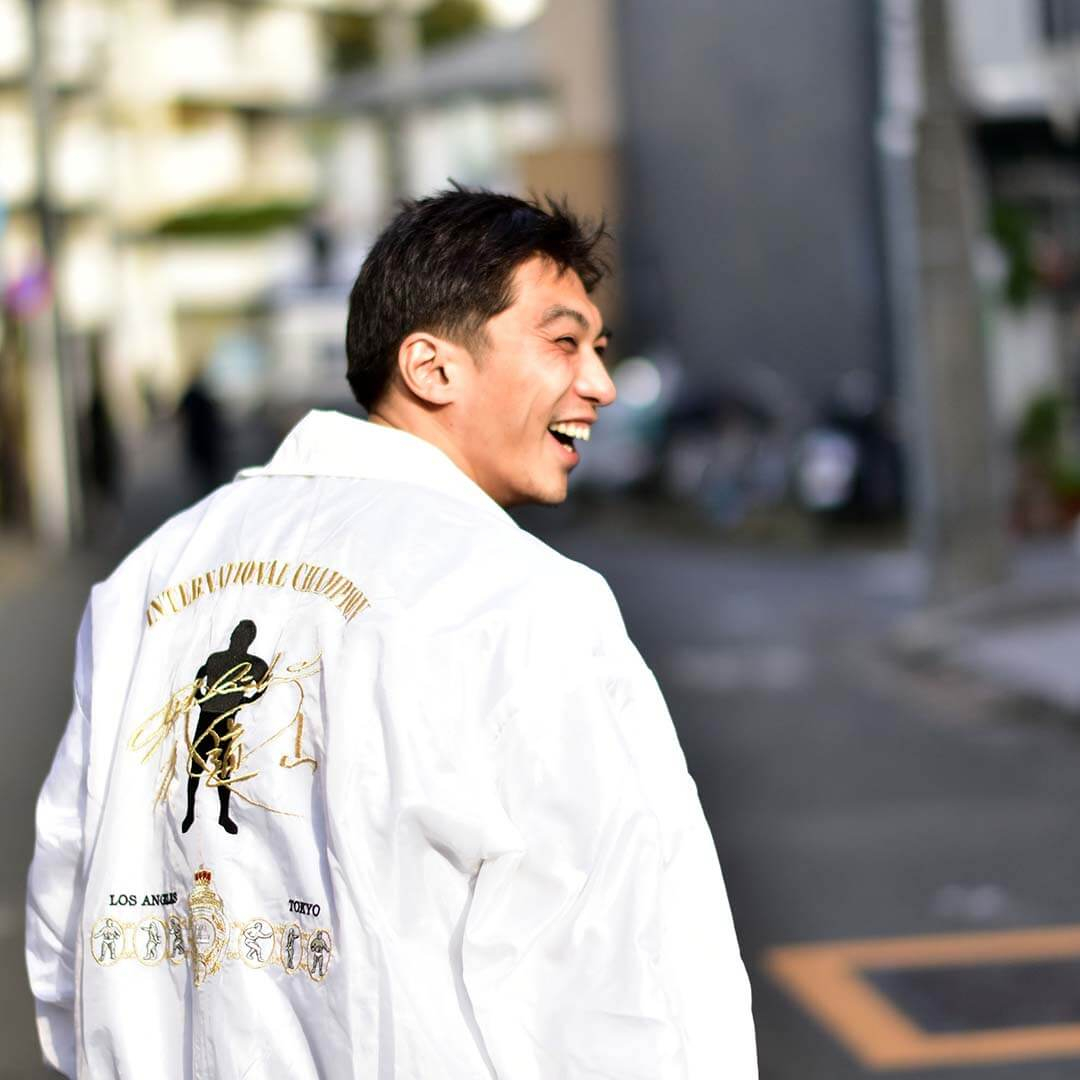 On December 12th, 2016, I took a stroll through the streets of Sendagaya with the actor Eita Okuno. He was resplendent in a jacket with gold embroidery honoring Rikidozan (a legendary Korean-Japanese pro wrestler). Okuno, a passionate fan of pro wrestling, has interacted personally and professionally with Chikara Momota, grandson of Rikidozan. 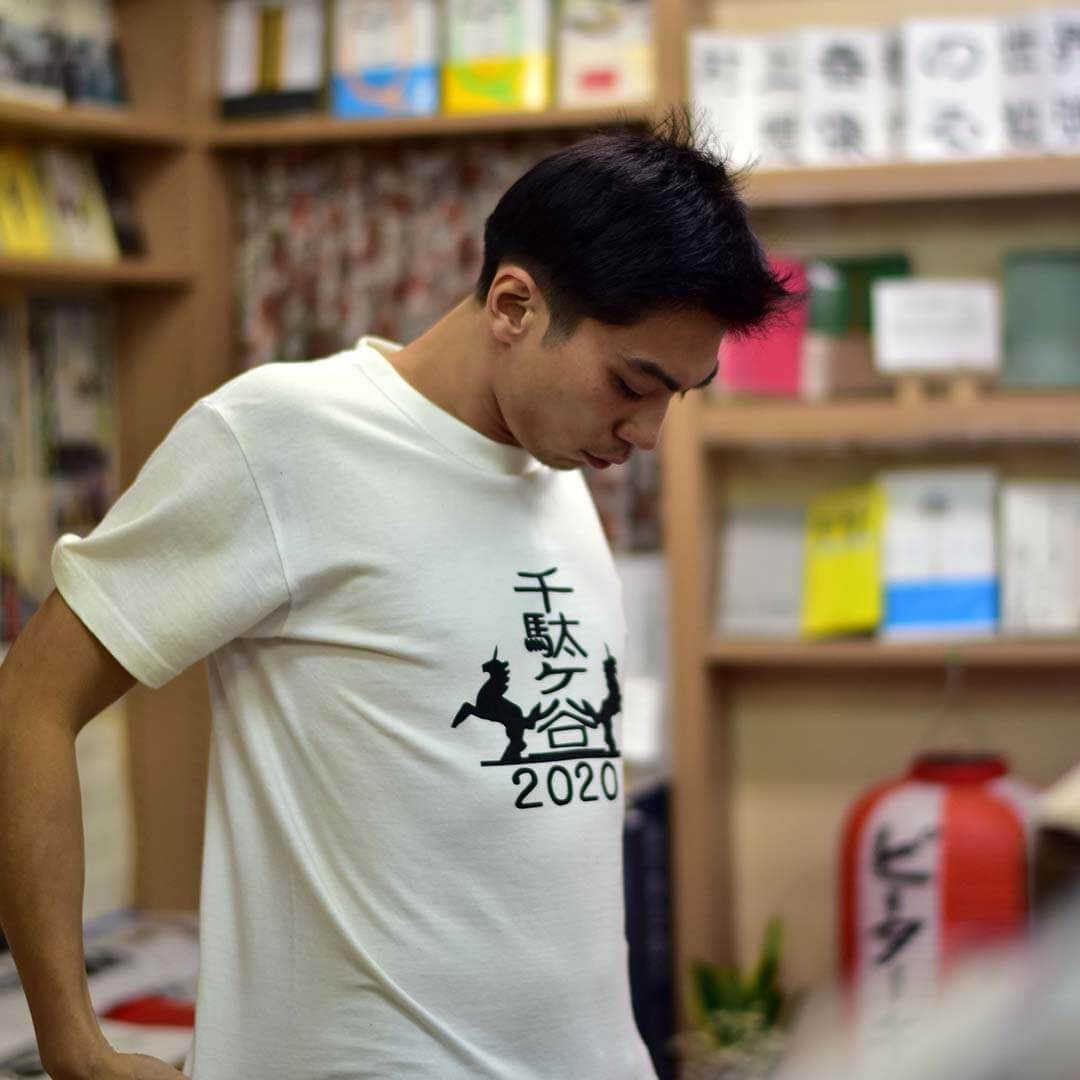 Book House Yu is a bookstore near the intersection in front of Hatonomori-Hachiman Shrine. Drawn in by the row of t-shirts at the front of the store, we pass under the sign curtains. Inside, there's a multifaceted lineup of shirts, including color variations. The t-shirts are original products designed by the owner of the store, Mr. Saito. When we asked about the design on the shirt that Okuno had chosen, Mr. Saito told us that the triangular shape represents the Fujizuka (a man-made mound that stands in for Mount Fuji), towering over Hatonomori-Hachiman Shrine. The two animals are the statues that stand in front of the Meiji Memorial Picture Gallery, while 2020 is the year when Tokyo will host the Olympics. 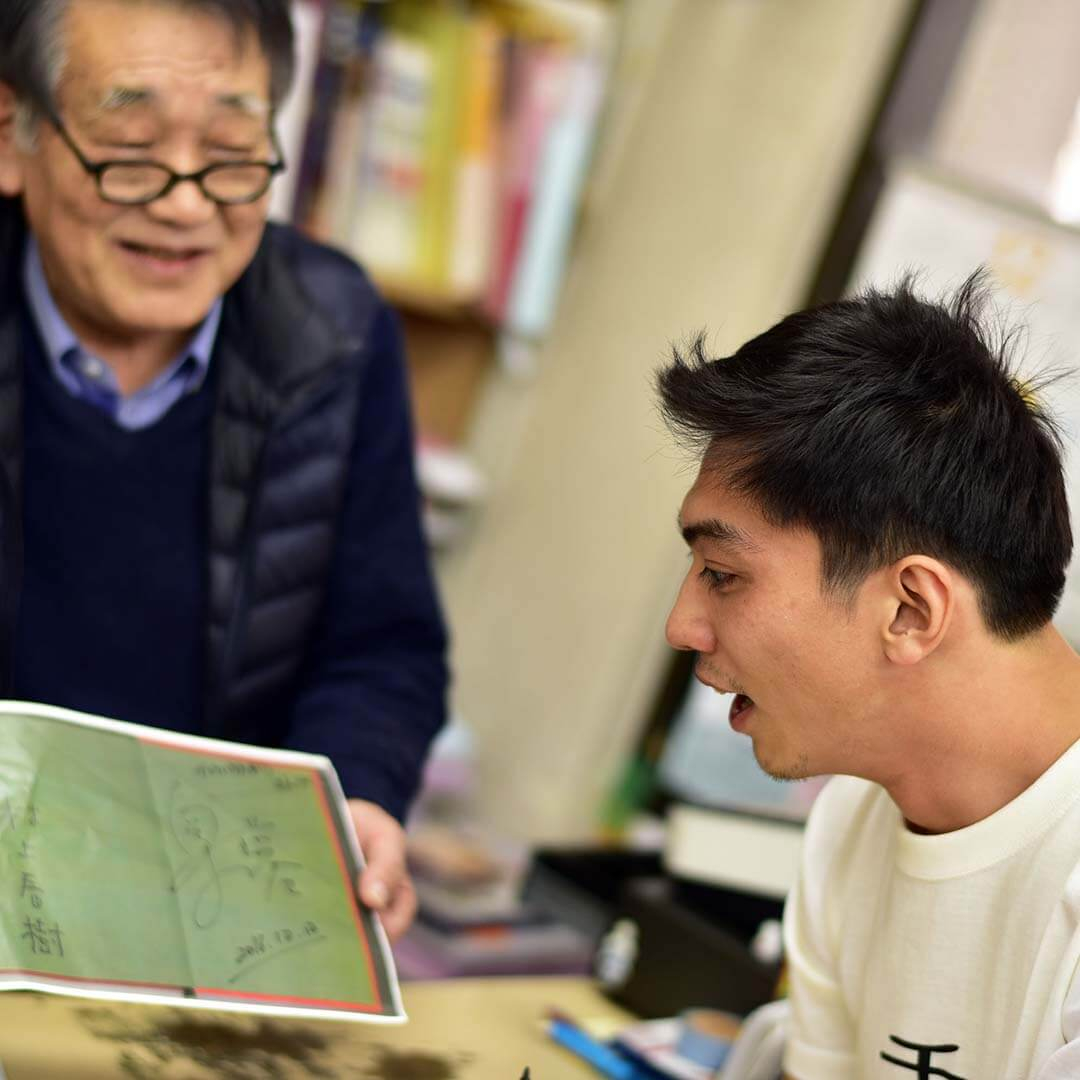 Sendagaya is a place with links to the author Haruki Murakami. His books line the shelves of this store. Given a sheet of paper bearing Murakami's signature, Okuno adds his, feeling bashful about it even though it's a copy. 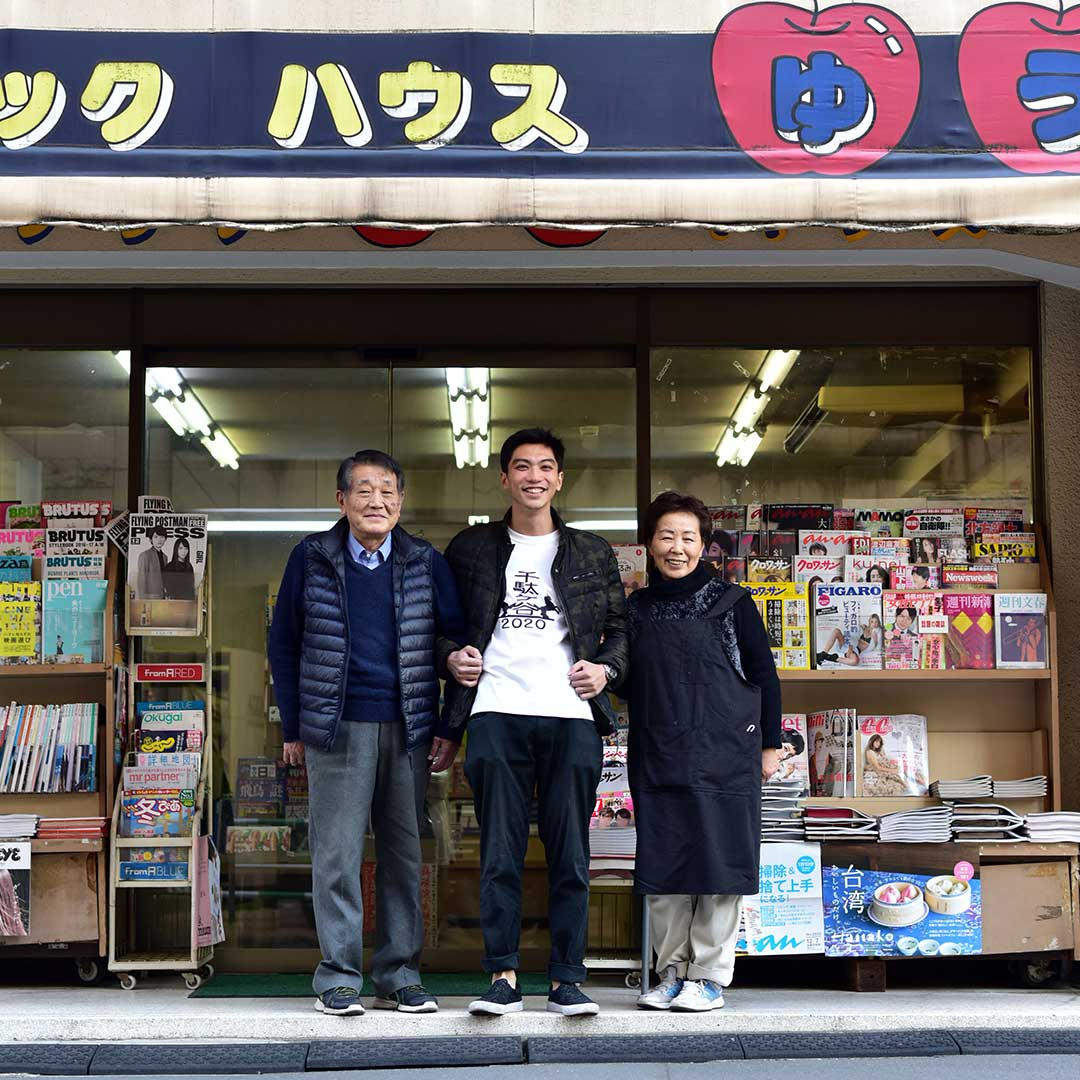 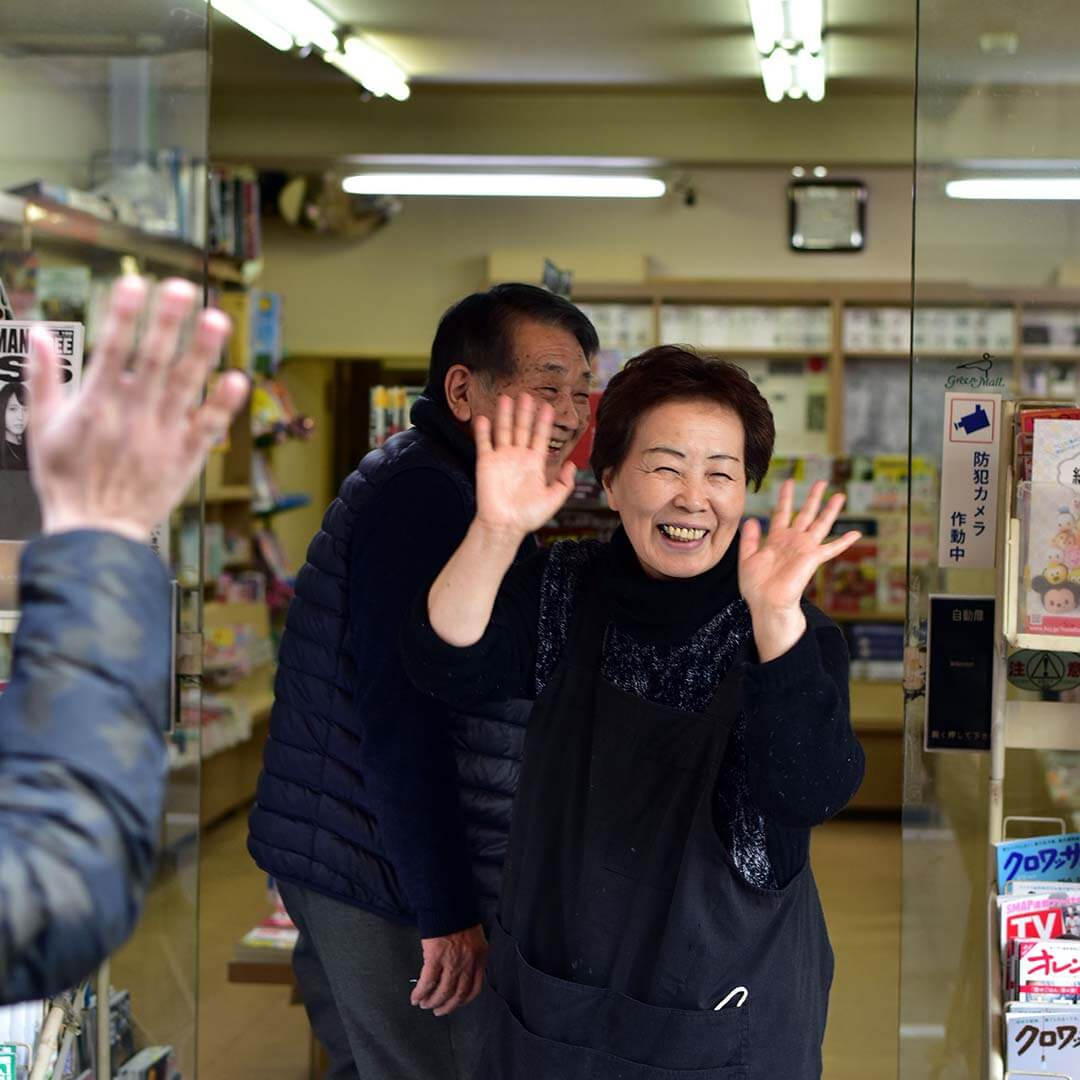 After saying our goodbyes to the shopkeeper and his wife, we decided to make a grand tour of the places depicted on the t-shirt. First up, though, we walk around Sendagaya Green Mall in search of a store where we can take a break. 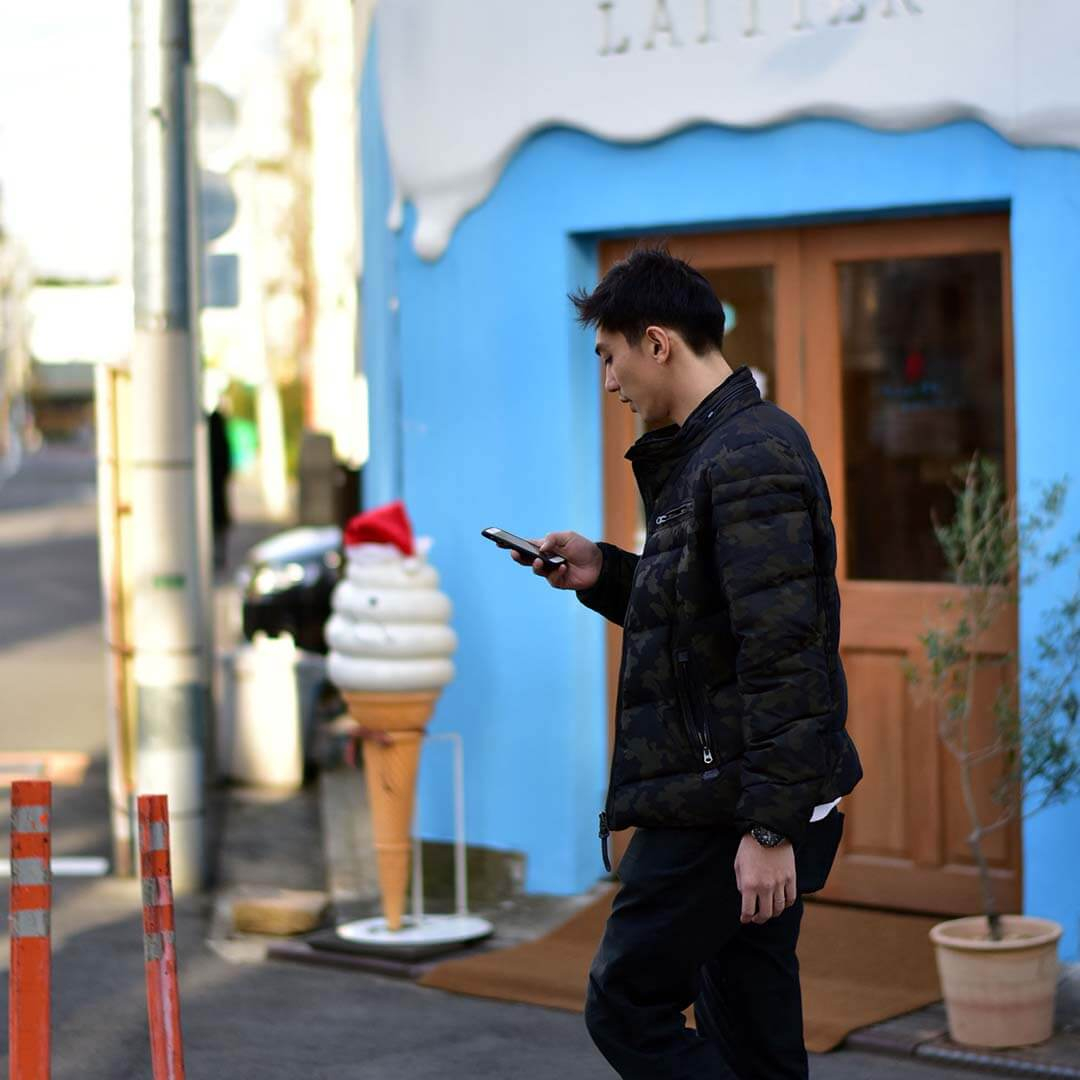 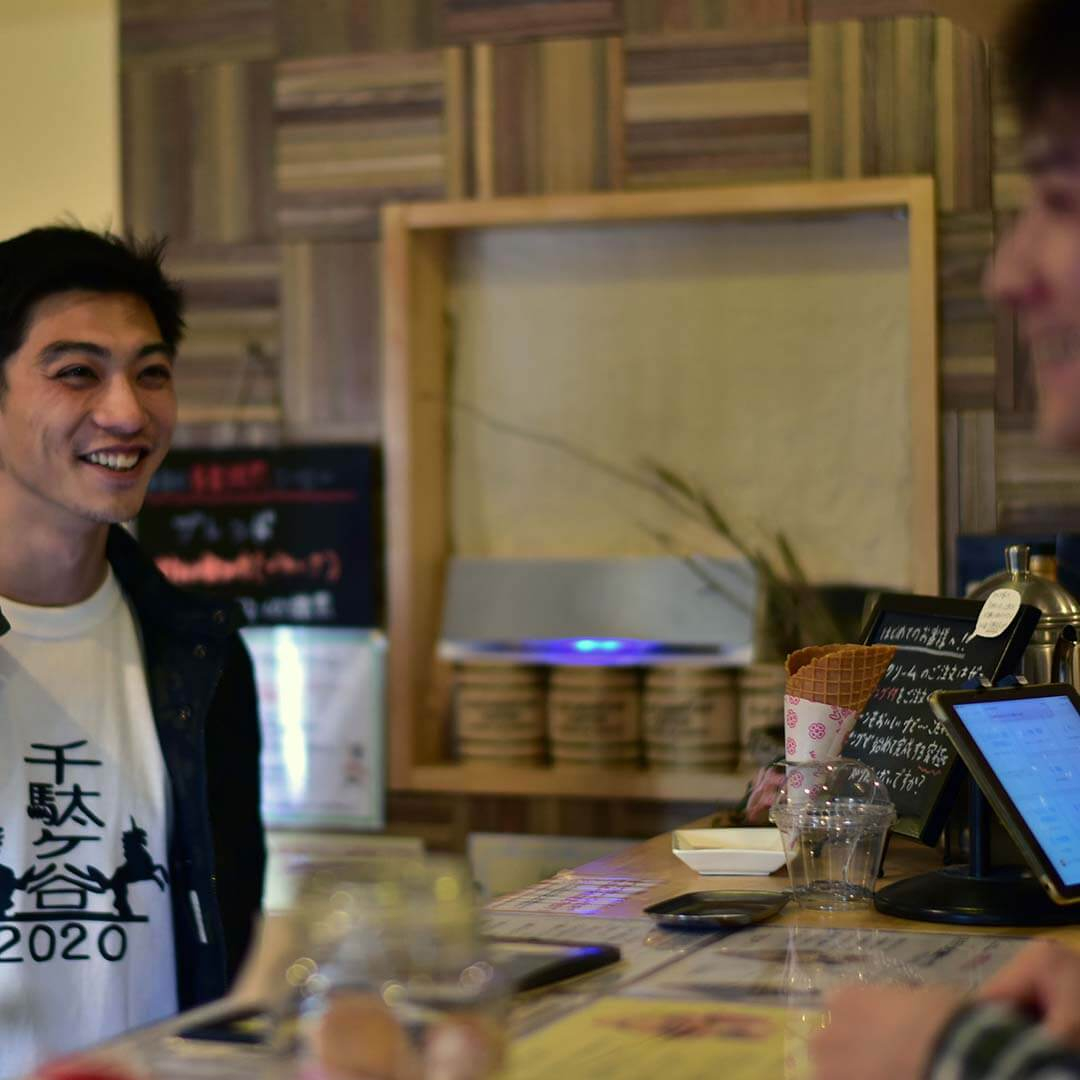 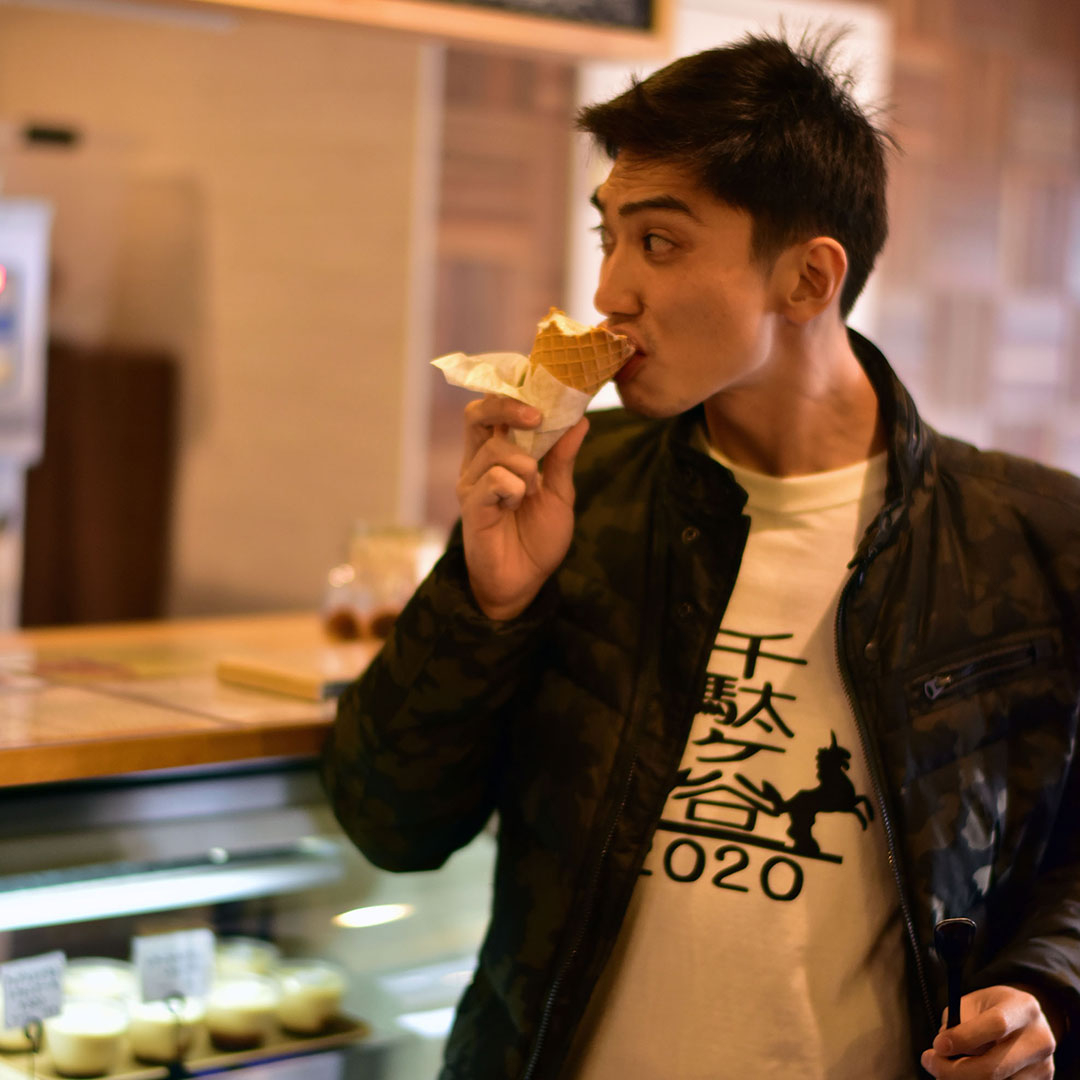 Vibrant, bright blue walls call out from LAITIER, a caf_ offering soft-serve ice cream. No matter where we go, Okuno makes himself comfortable at the store without ostentation. The soft-serve is exquisite, with a rich flavor. 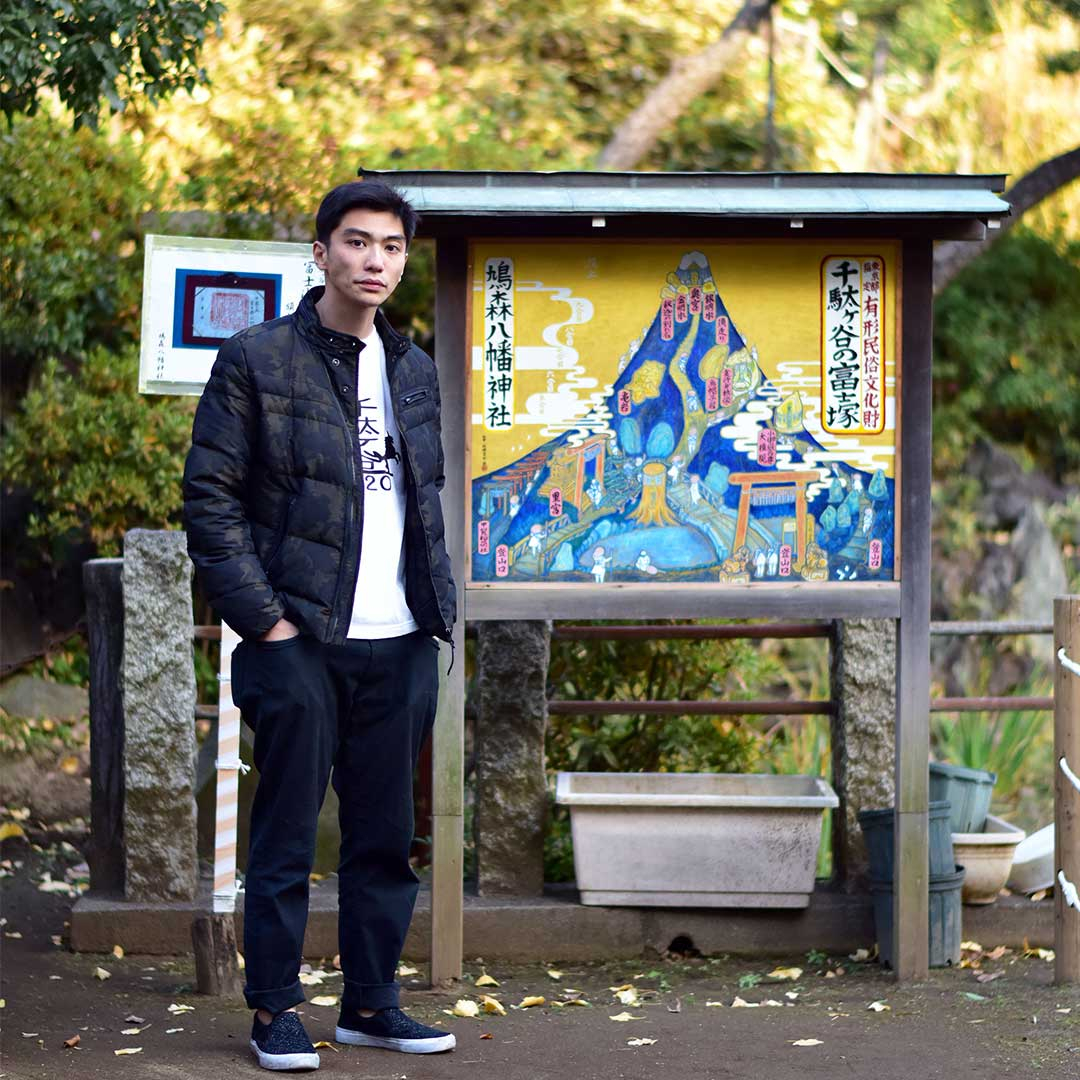 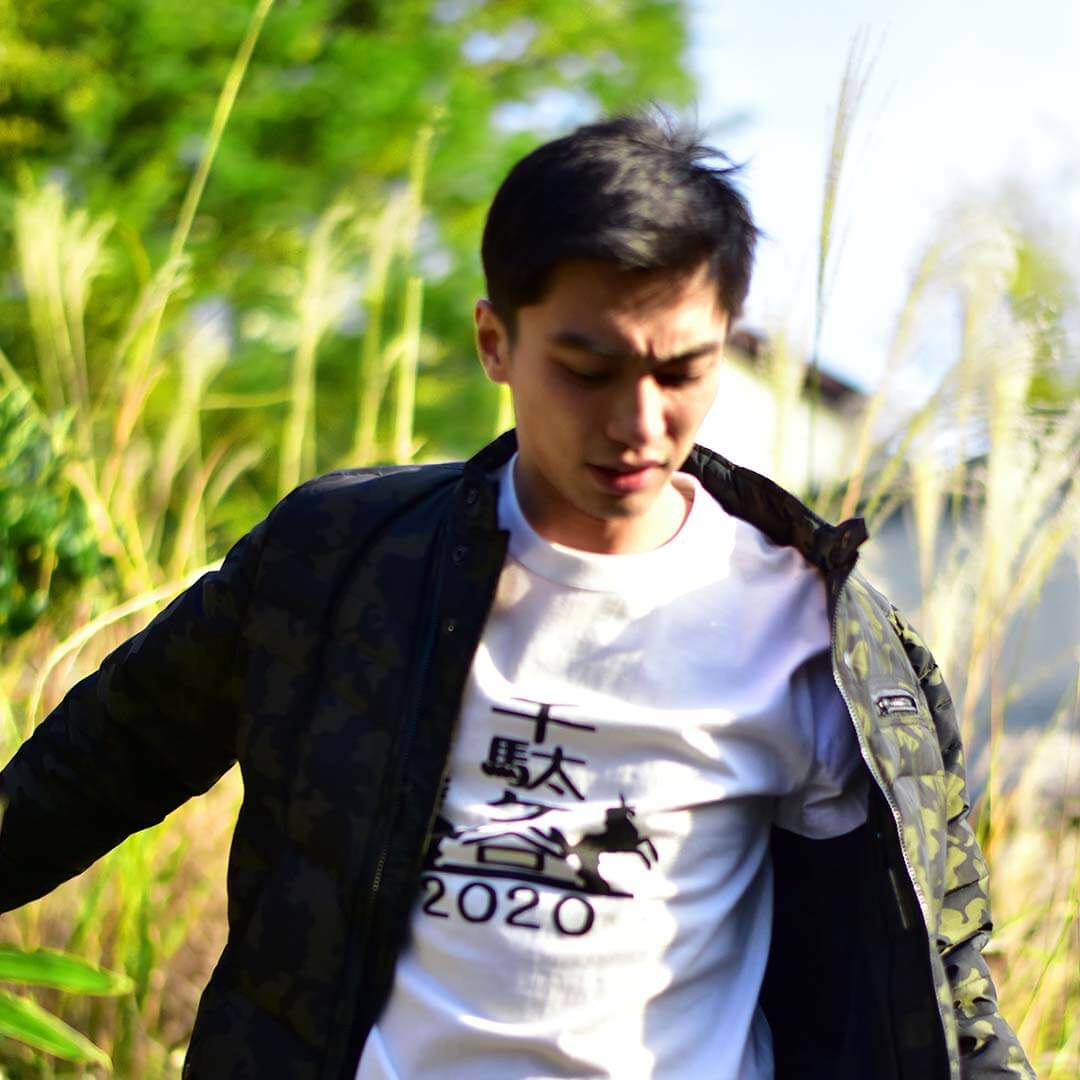 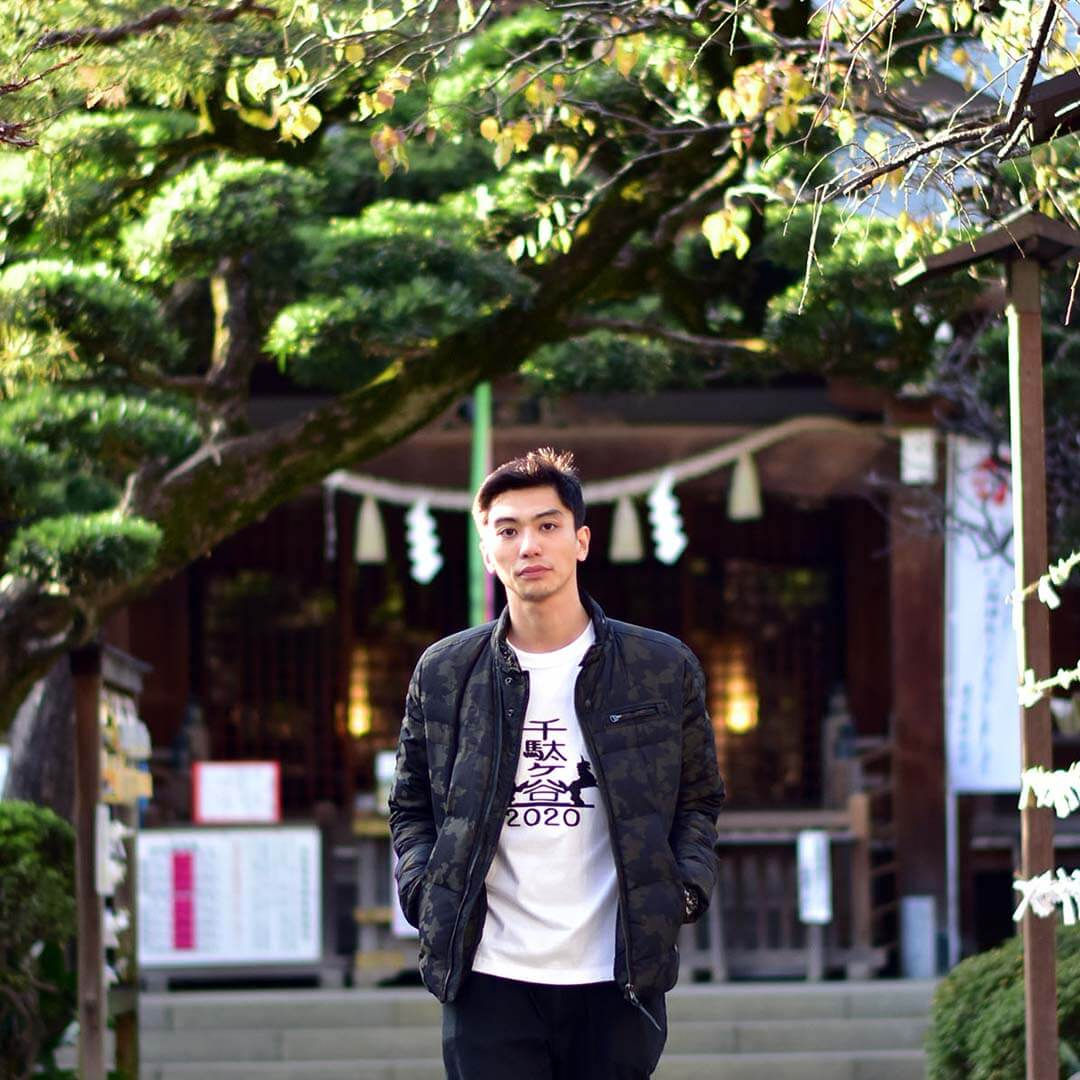 Next, it's off to Hatonomori-Hachiman Shrine. The Fujizuka is said to have been made in 1789 (first year of the Kansei era). In 1981 (56th year of the Showa era), it was designated by the municipal government as a Tangible Folk Cultural Property. Near the shrine is the Shogi Hall, which features in March Comes in Like a Lion, the story of a pro shogi (Japanese chess) player named Rei Kiriyama and the people around him. Okuno appears in the live-action film version as Junkei Yamazaki, Kiriyama's rival for the Rookie of the Year award. 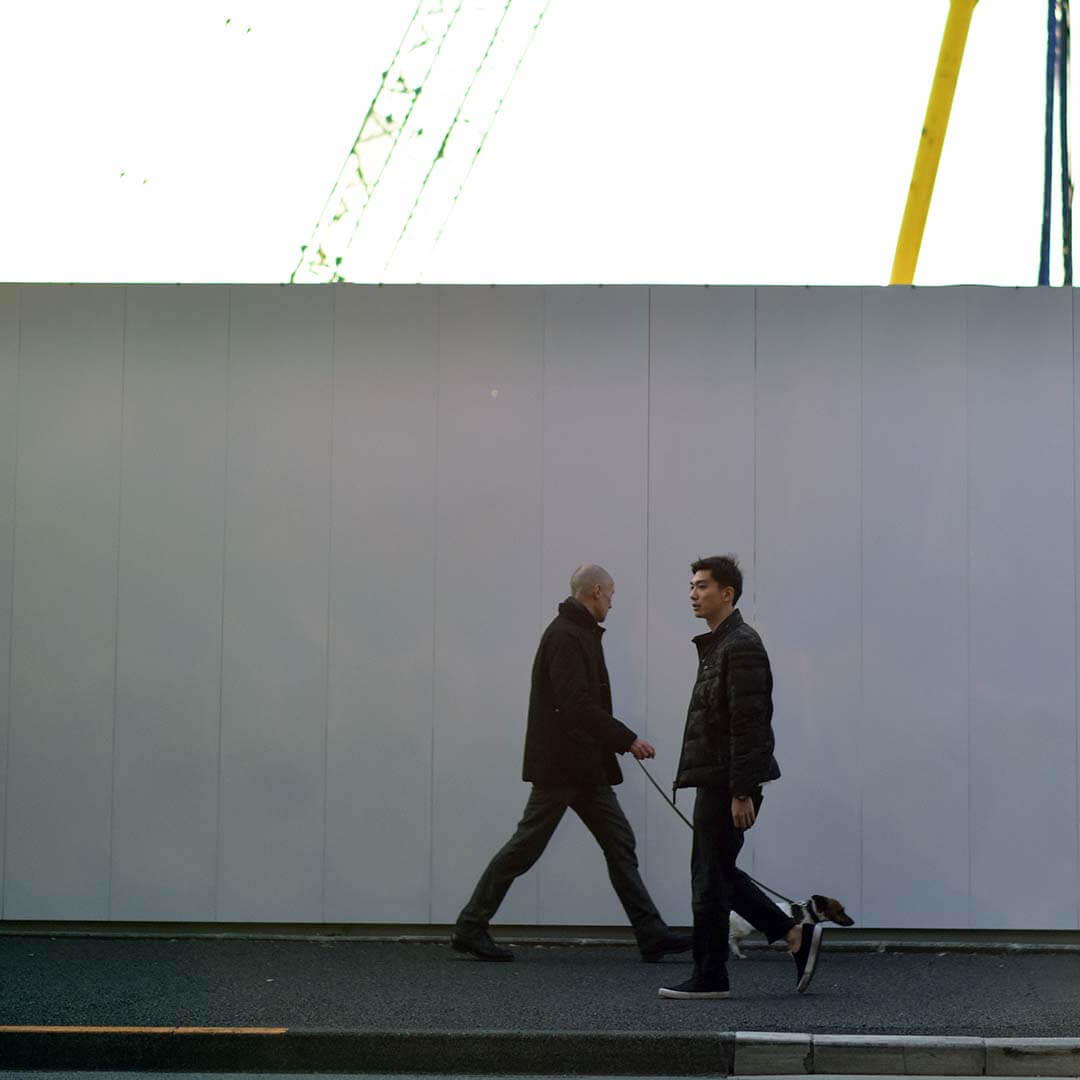 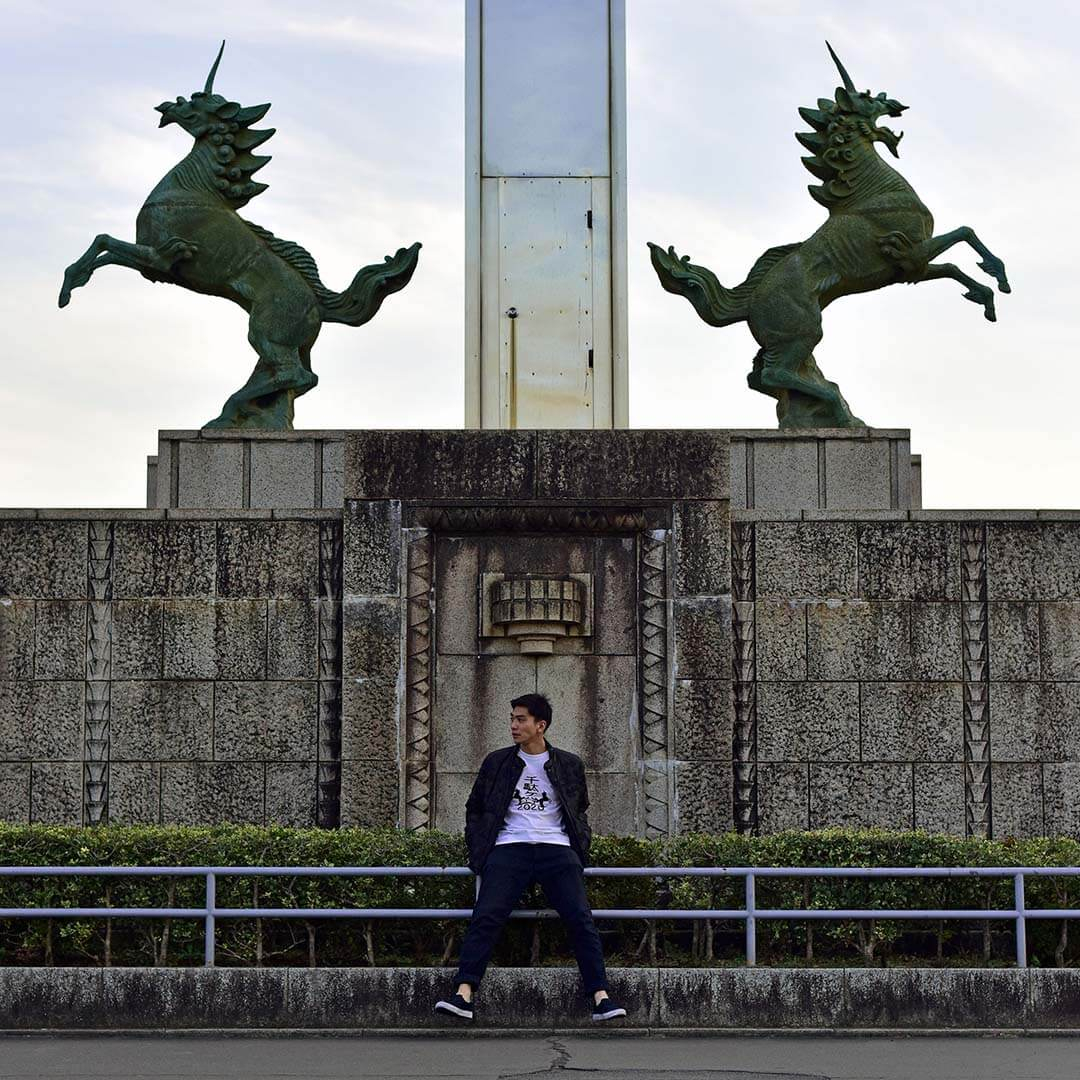 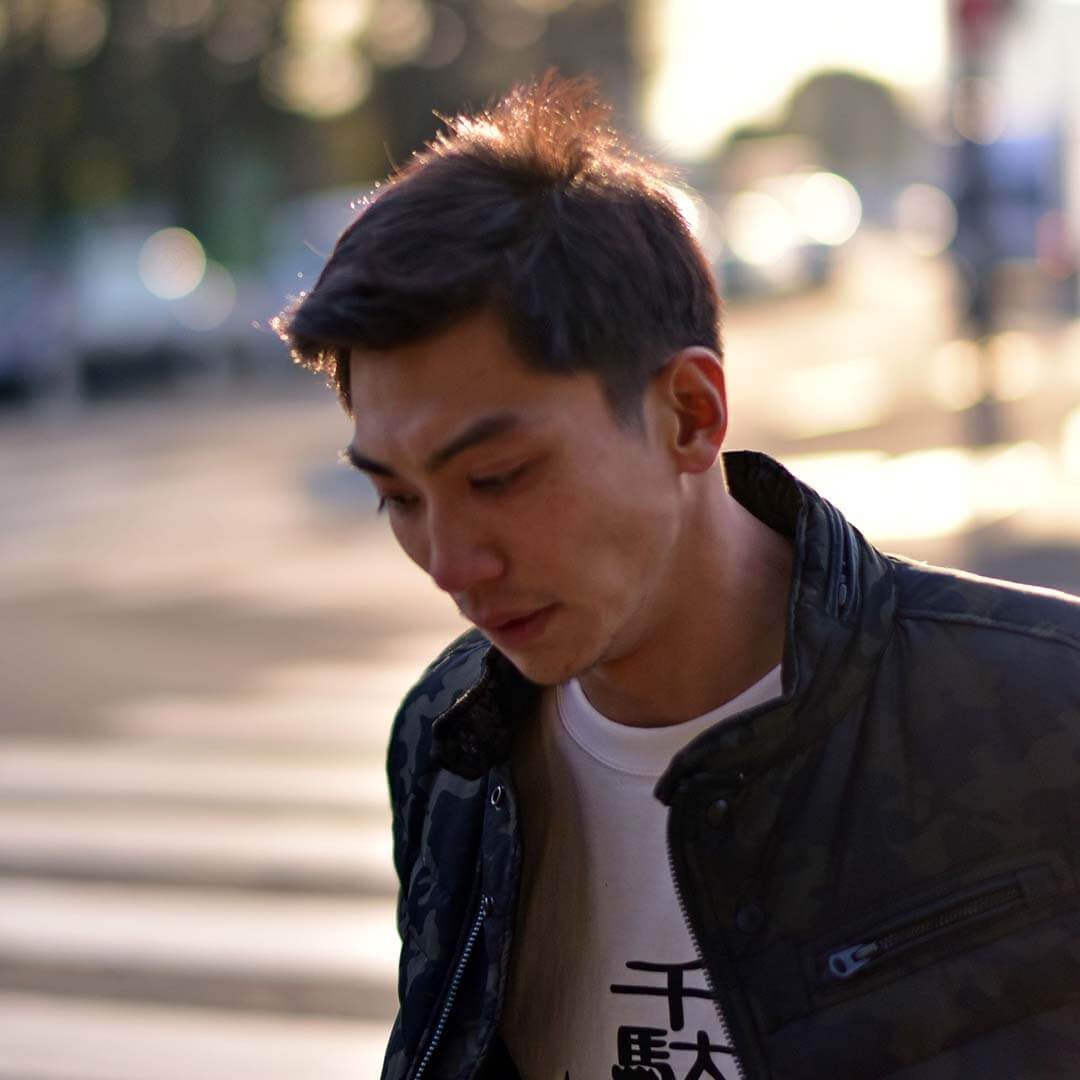 As we head for Meiji Jingu Gaien, we walk by the construction site for New National Stadium. The service entrance periodically opened, allowing us to see what was going on inside, but we were overwhelmed by the sheer size of it. When we finally arrived at the Meiji Memorial Picture Gallery, those statues really were there, in a place not far from a shopping district.

I once interviewed Okuno about his neighborhood. It was a chat about how the neighborhood where you grow up is the neighborhood you love. Born in Tomakomai, Hokkaido, he moved to Saitama to attend university. While still in school, he commuted to Shimokitazawa to perform at a small theater. After graduating, he moved to a neighborhood two or three stations removed from there. Okuno told me he wanted to live in a place with a bit of separation from everything that was going on in Shimokitazawa.

Sendagaya is a neighborhood surrounded on three sides by the green spaces of Shinjuku Gyoen, Meiji Shrine, and Meiji Jingu Gaien. It's also not far from terminal stations in Shibuya and Shinjuku. The neighborhood's countenance changes rapidly as you walk. On the way back from Meiji Jingu Gaien, I felt a certain solitude in the lights that come with the dusk.

It's 1,215 days until the Opening Ceremony of the Tokyo Olympics. 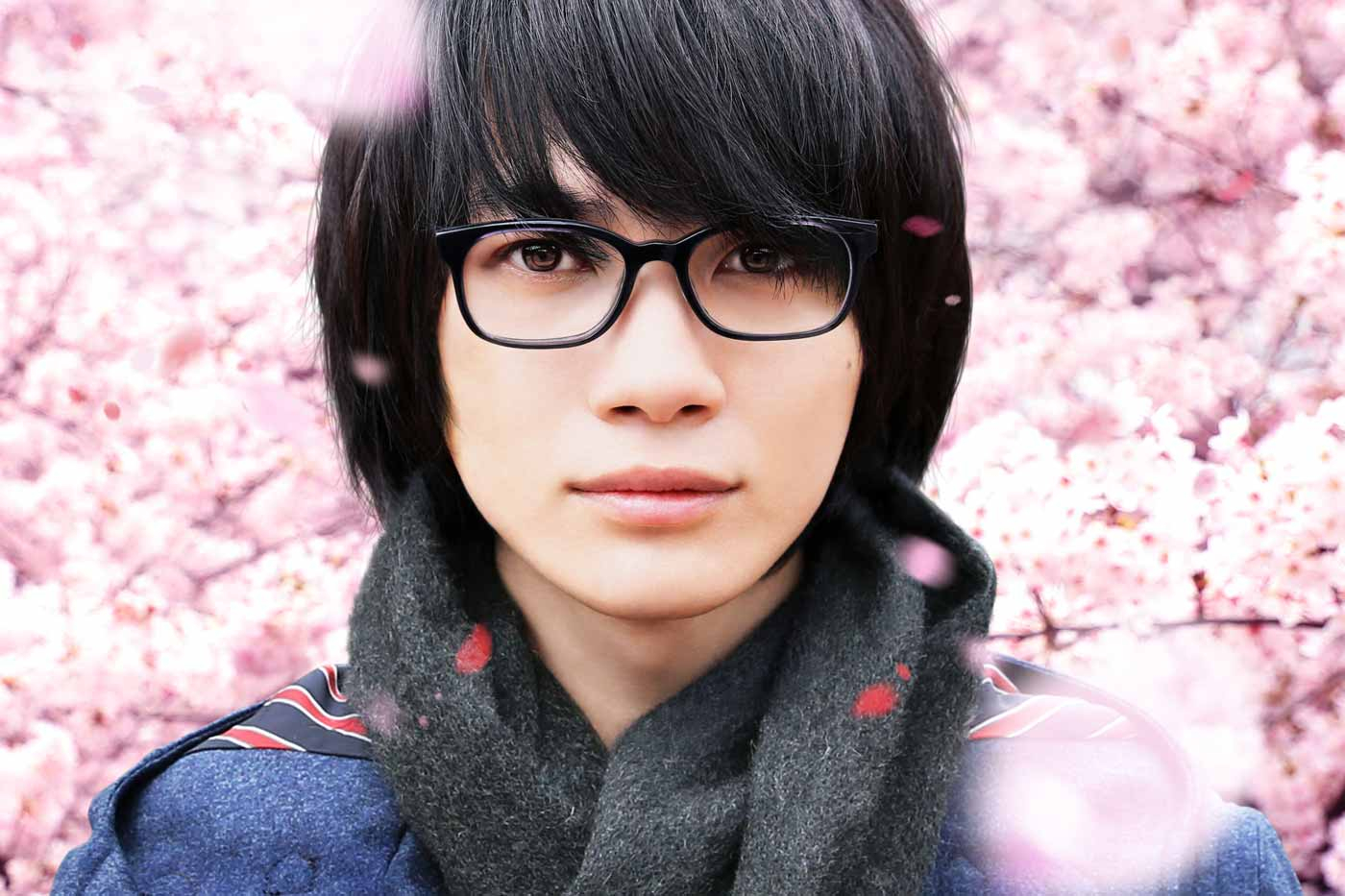 ©2017 March Comes in Like a Lion Film Production Committee 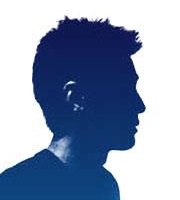 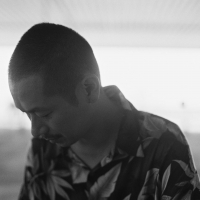